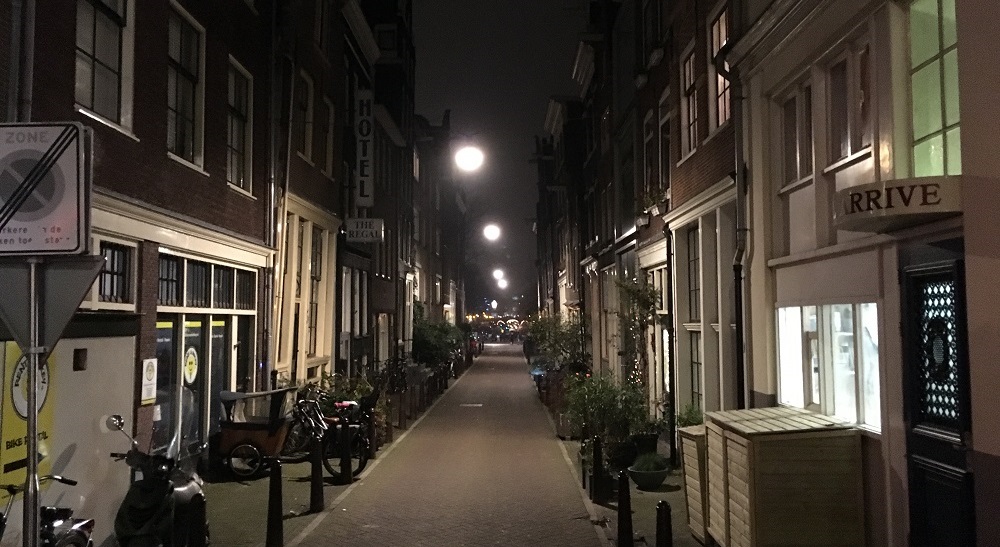 When we booked our flights to Tanzania, we intentionally scheduled an overnight layover in Amsterdam. Most try to make their layovers as short as possible, but we figured if we were going to go that far, we might as well take advantage of our location. Besides, my fiance had never been to Europe before so it was a good excuse to explore a little, even if time was limited. 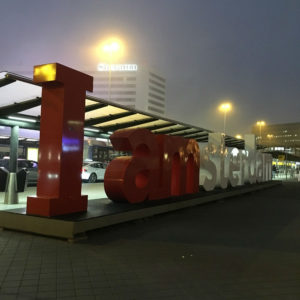 I will prelude this by saying that if I could give one piece of advice if you ever make it to Amsterdam (or anywhere, for that matter), it would be to not worry about having a plan. I've realized that one of my favorite things to do when visiting a new area is to just give myself my own tour. Don't worry about following a map, getting to all of the “must-see” tourist stops, going on tours or eating at the top-rated restaurants according to Trip Advisor. Just walk around and see where your feet take you. If you want some guidance, ask a local. You'll get a better feel for the city, you'll stumble into fun hole-in-the-wall bars and restaurants, and you'll likely see a whole lot more than you would have otherwise.

We were scheduled to arrive in Amsterdam at 2PM and leave around 10AM the following morning. But, our flight from Paris got delayed by at least 2 hours, cutting our time in the Netherlands even shorter than planned. Fortunately, our hotel was a short walk from the Schiphol airport and we didn't need to claim any baggage, so we booked it out of there as fast as we could, checked in to this funky little hotel called the citizenM (more on that later), showered, then made our way out to explore. 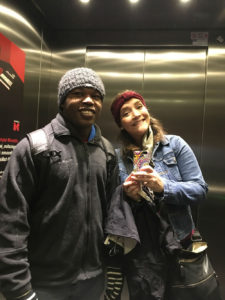 Because there were so many places to see and we didn't want to waste any time, we asked a woman at the hotel for suggestions on transportation, dining and easy site-seeing. She recommended that we hop on the train (located beneath the airport) and take a ride into downtown Amsterdam where we would find plenty of canals, food and historical buildings. We must have looked like confused Americans as we tried to navigate the train schedule and ticket buying machines, because a family of 4 walked by and asked if we wanted their All-Day train passes that weren't set to expire until 2AM. Score! We caught the train, took the ~15 minute ride into town and were off.

We found our way to the main streets in town and were slapped in the face with a chill so cold that we latched onto each other like leeches. Flash forward to a late night Uber ride where we learned that the temperature was literally as cold as it ever gets there and that we just happened to choose a pretty unpleasant evening for our one-night adventure. Not that we were going to let a little cold spoil our evening – we are from New England, after all! 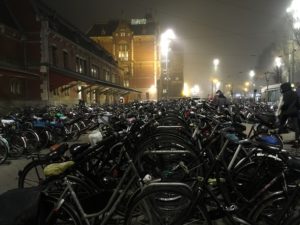 The very first thing that caught my attention (other than the temperature) was the unreal amount of bicycles. I did read that most Amsterdam residents travel on two wheels but seeing it in person was something else. The jam-packed bike lanes, garage after garage filled with racks of bikes, the massive lots with hundreds of two-wheelers chained to racks. They were everywhere! It was pretty clear that if you weren't an aggressive biker with knowledge of the city's twists and turns, it was probably safest to stay on foot or catch a ride. Just steer clear of the bike lanes. 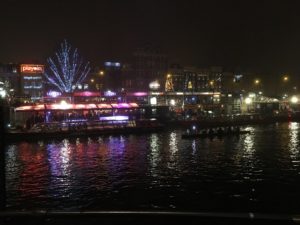 We made our way through a tunnel that spilled us out into what seemed to be the city center. One of many beautiful canals surrounded by gorgeous buildings, bridges, bikers, restaurants, pubs and more (note the brave rowers in the picture above). One of the main things we wanted to do was go on a canal tour since the festival of lights was still going on, so ending up in a tour hub was perfect for us, given the short amount of time. However, it was so bitterly cold and we'd already lost a lot of time, so we decided to just take the city by foot and perhaps return after exploring a little. It was already about 7PM at this point so we were hesitant to commit to one activity. Plus, the fog was real and it didn't seem likely that the views would be as great as we were hoping. 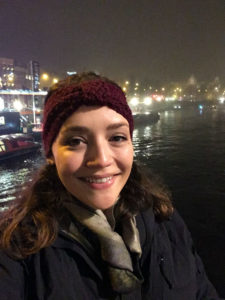 Bitterly cold… but not enough to stop us from taking selfies. This was one of those nights that those fingerless gloves would have been clutch.

We walked around the streets for a bit, snapping photos of the buildings and the water while trying to figure out which direction was likely to have the most activity, but it turns out that every nook and cranny of Amsterdam has something going on. Not sure that there really is a best direction as you're bound to find SOMETHING wherever you go. Every time we thought we were getting further away from the activity, we'd find another pocket of people. 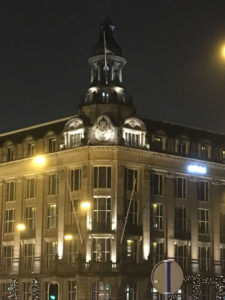 We eventually made our way down a side street that led to a super long road filled with food, drinks and Amsterdam's favorite kind of shops. The road was bustling with people of all ages (and continued to bustle through the wee hours of the morning) – likely due to the holidays. Seriously, it was PACKED. We poked our heads into a few shops to see what all the fuss was about before deciding that a nice strong cocktail was needed to warm our bellies until we could figure out where to eat dinner. 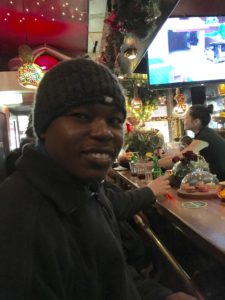 Most bars, or “coffee shops,” were as you'd expect… table after table of joints, hookahs and happy people. In fact, the only place we didn't saturate in marijuana smoke was at the restaurant we went to for dinner. I can't for the life of me remember where we ate, but it was good. After dinner we took to the streets and walked around for hours, stopping at random stores and pubs practically every other block to catch some warmth and maybe a drink. Of course I navigated my way to the cheese section of some random grocery we went to when we needed to check our map for directions. My biggest regret is that I didn't buy any. I don't even know who I am anymore – so unlike me. 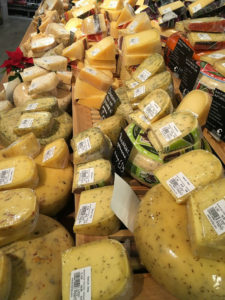 We were later told that another good place to explore was an area called Leidseplein. There, we walked by this strange bar called “Surprise” – a bar that at first glance looks exactly like one of those places you don't venture into – and went in despite my mild uncertainty. If you know my fiance at all, you know he's curious and more often than not, you've just got to follow his lead because you're bound to have a good time if you support his need to explore. So glad we went in because it was so fun and so weird (in a good way). We indulged in a few drinks, listened to music and most importantly, people watched. This is when we were introduced to “Oops Upside Your Head” – a song where people sit on the floor and dance in a rowing motion.

After a whirlwind evening on the streets of Amsterdam, we went back to the citizenM and enjoyed a few cocktails in their super cute lounge area. We loved that there were all these little pockets of comfort to hangout and enjoy a drink, read, do work, whatever you wanted. The staff was so helpful in giving us tips, the drinks were good, and the overall vibe was comfortable and funky. We would definitely stay there again. 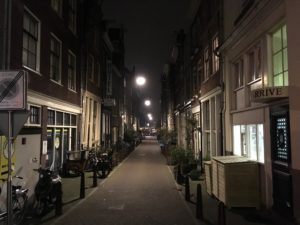 It's easy to understand why so many sing praises of Amsterdam. It was already dark by the time we left the hotel at the beginning of our night out so we didn't get to see as much as we wanted… but we still got to feel the comfort and welcoming that the city as a whole exudes. The homes were so quaint, the roads were so peaceful, the people were friendly, the restaurant and bars were fun, and the overall vibe screamed “come back!” We've already decided that if we do end up going on a Europe tour for our honeymoon, Amsterdam will be at the top of the list. 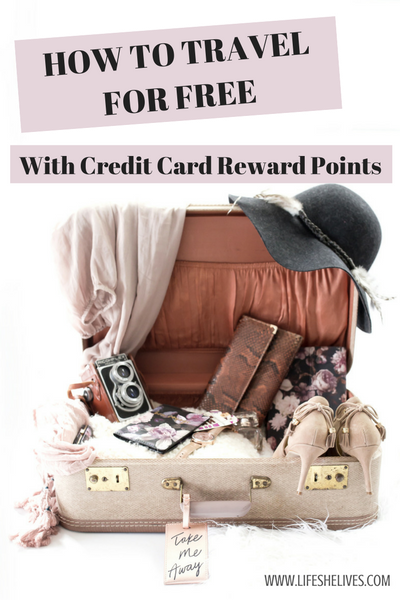 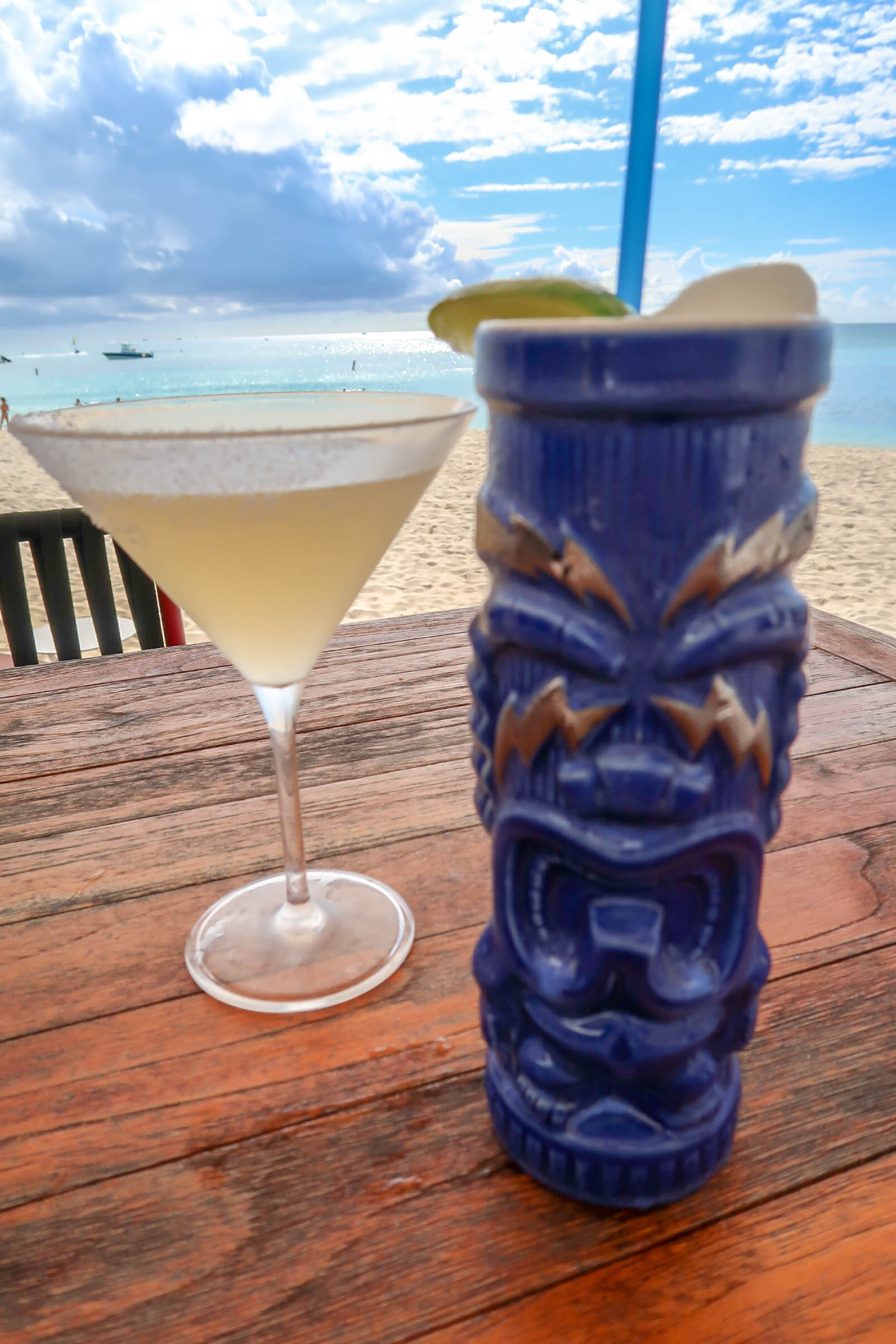 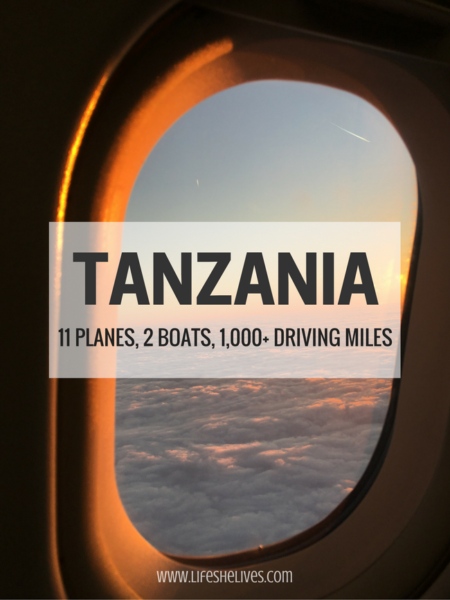 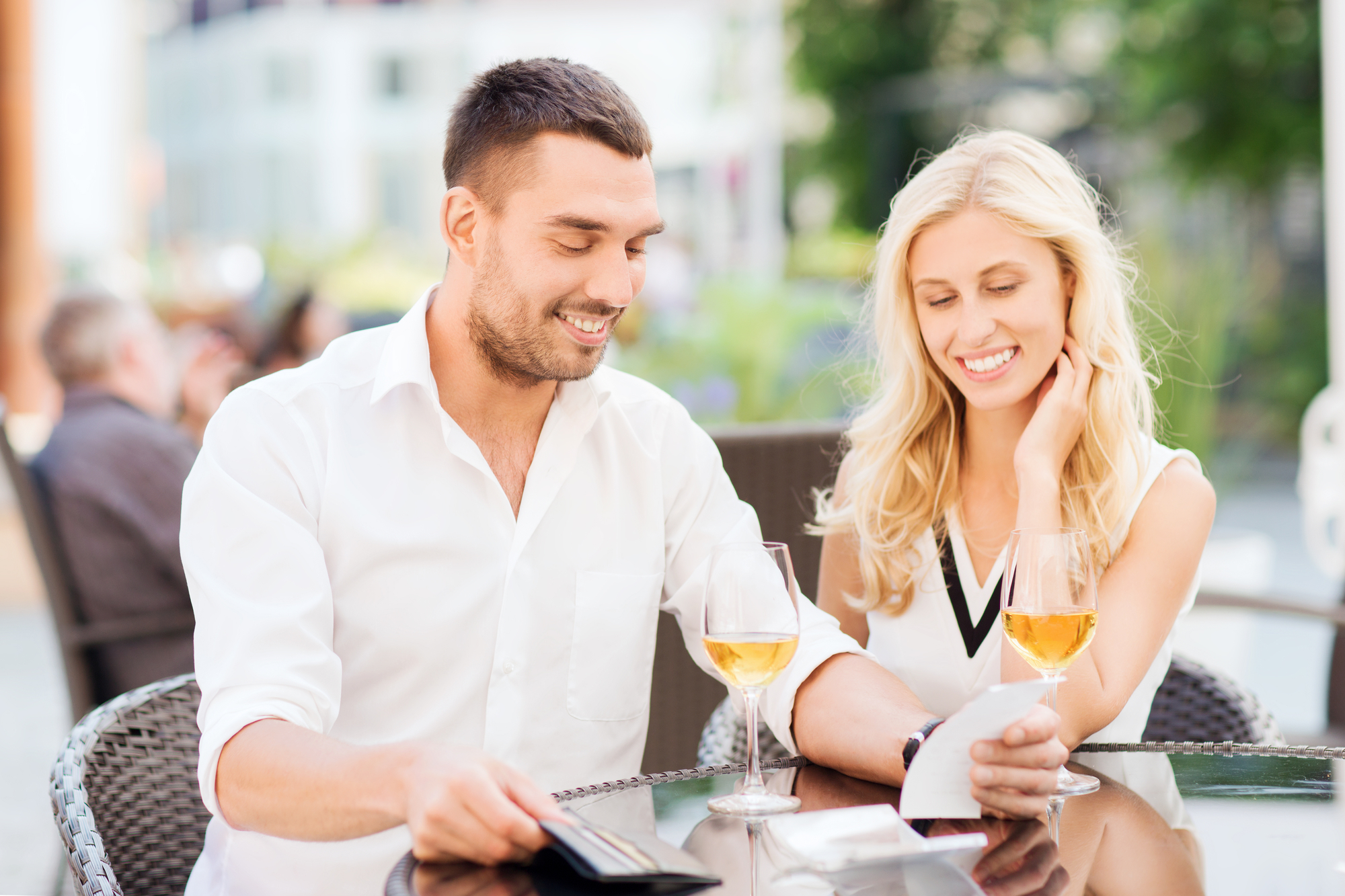 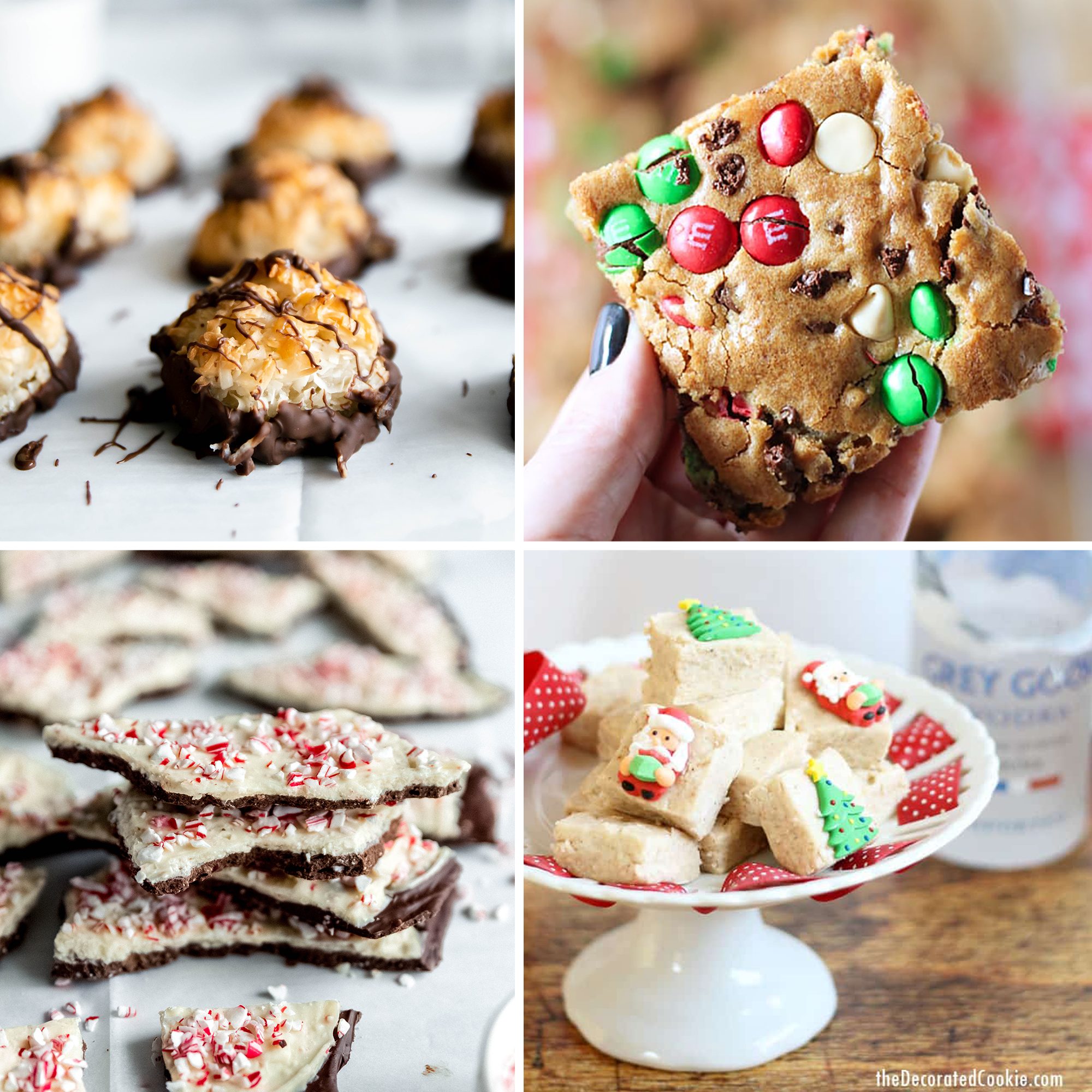 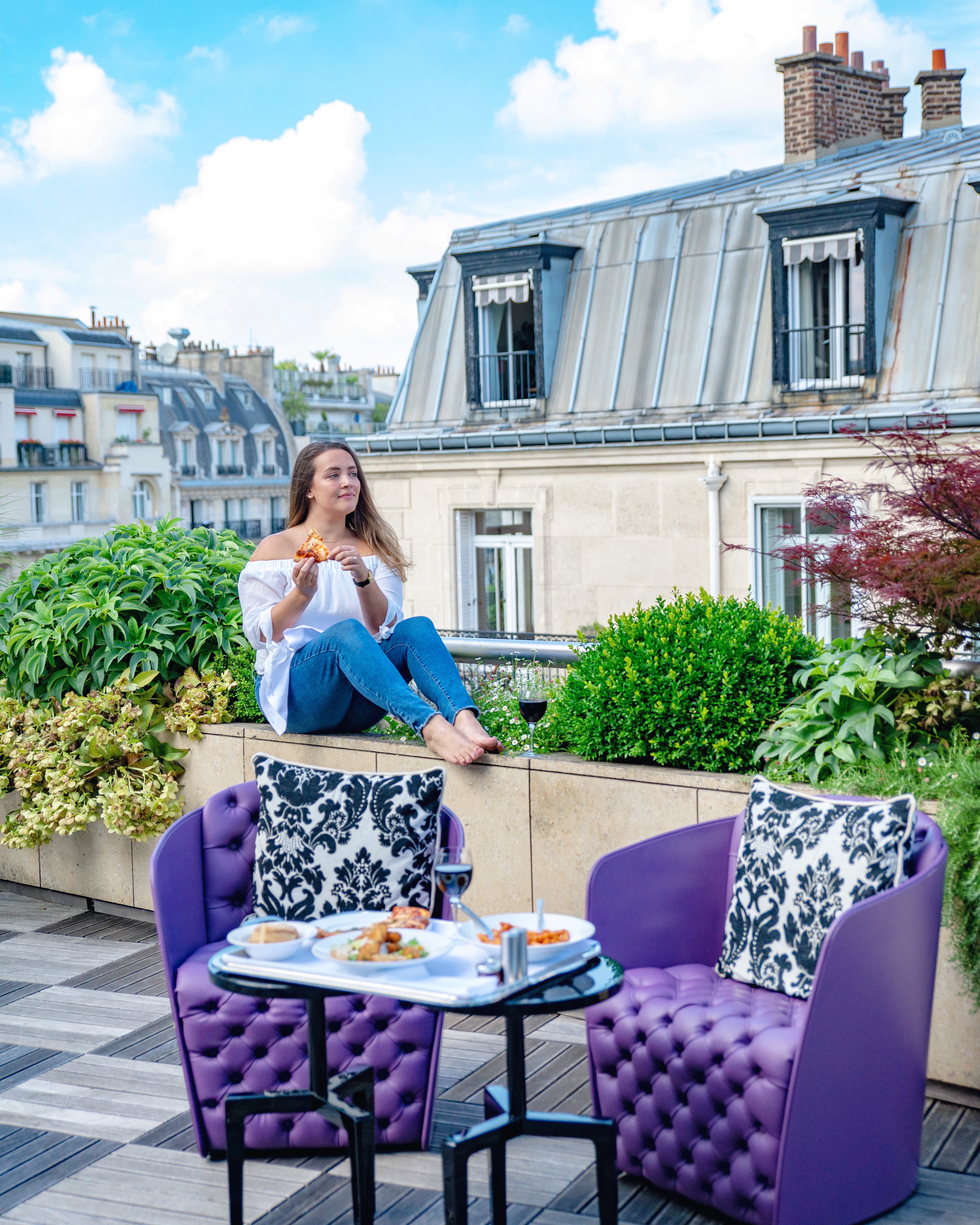