The Ngorongoro Crater, or, the Ngorongoro Conservation Area is a World Heritage Site located in the Crater Highlands of Tanzania. It is a volcano that collapsed into itself many, many years ago, and is now a protected conservation for thousands of animals. 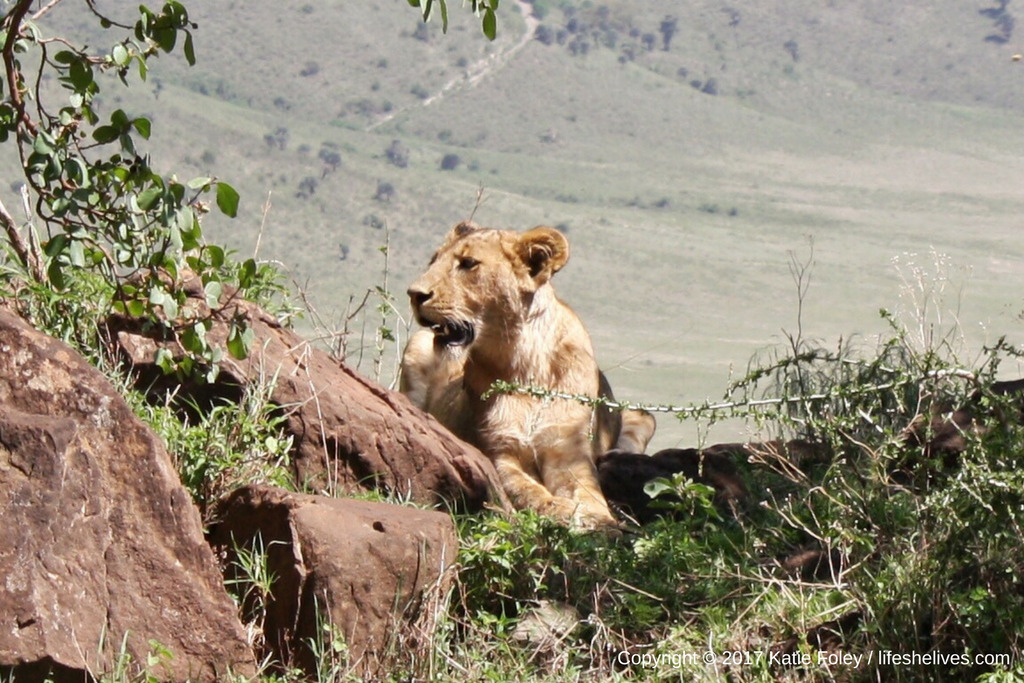 I cannot begin to explain how amazing our second safari was. We went in optimistic, after having a very successful first safari at Lake Manyara National Park, and our optimism absolutely paid off.

We began our descent into the crater and were forced to a stop no less than halfway down. There were a good handful of other trucks making their way in for the day so we initially attributed this to the steep winding road. I mean, we weren't even halfway down the slope, so we certainly weren't expecting to spy any animals just yet! Sure enough, it wasn't simply road traffic… everyone was pulled over to see a lion and a lioness who were seemingly guarding the entrance to the conservation area! 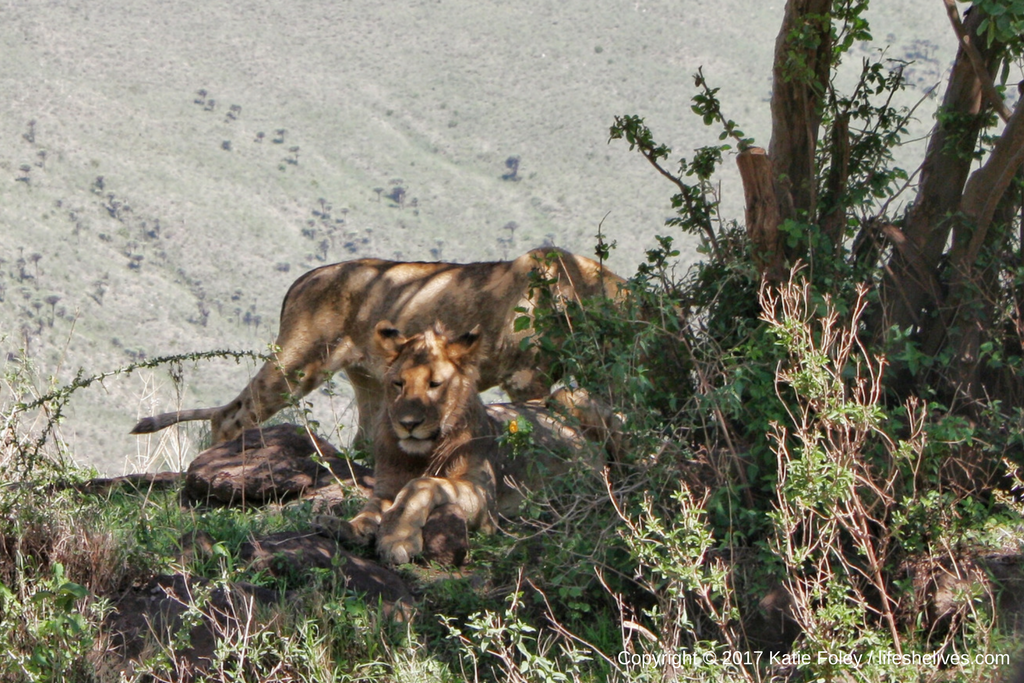 Now, these were two of TEN lions we were lucky enough to see that day! Off to a good start.

Ngorongoro Crater is chalk-full of animals. From afar, the area just looks like it's speckled with trees, bushes, rocks and other forms of nature, but the closer you get the more you realize that they are actually packs of animals feeding on the grass.

Thousands of zebras (seriously, I had to narrow down which photos I was going to use for this post because there were just SO MANY), wildebeest,  impalas, water buffalo, the occasional hyena and warthog, and even a far away siting of a rhinoceros! 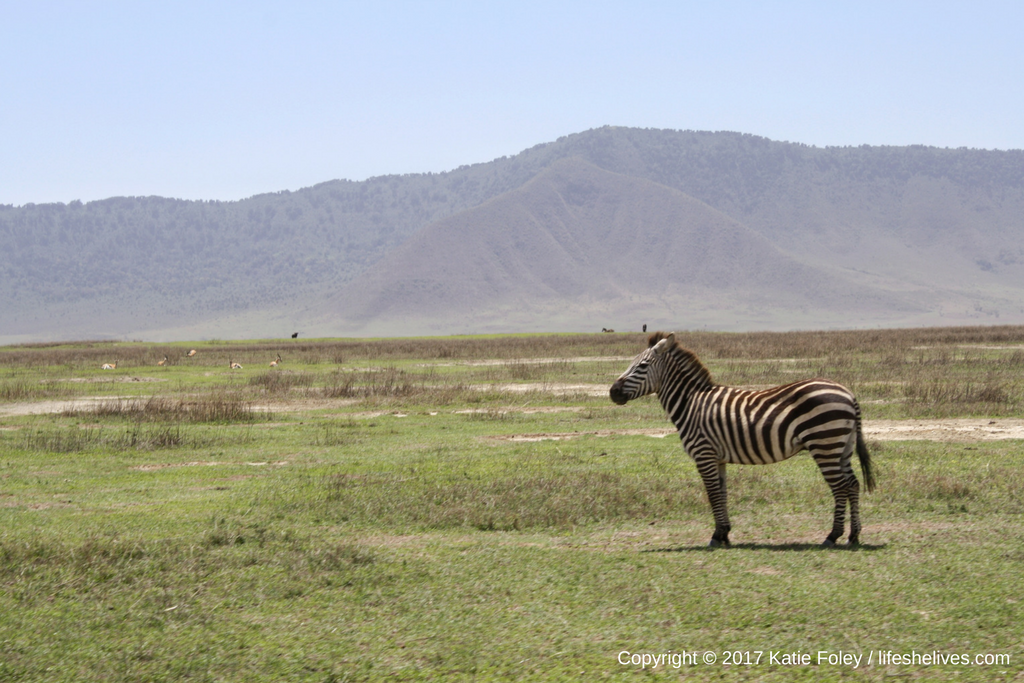 We roamed the conservation area for about 4-5 hours, stopping at various points to take in the scene and get our photos. One of the coolest stops we made was at the hippo pool – not just because of the hippos, though! Overlooking the pool was a miniature hill on which 4 or 5 lions were lingering, taking their afternoon rest while subtly scoping out their next meal. They were a little hard to spot at first, but once you identified their color as compared to the color of the rocks, you couldn't stop seeing them!

Photos were impossible… you'd need to have one of those super serious lenses to reach them, but the sight isn't bad! 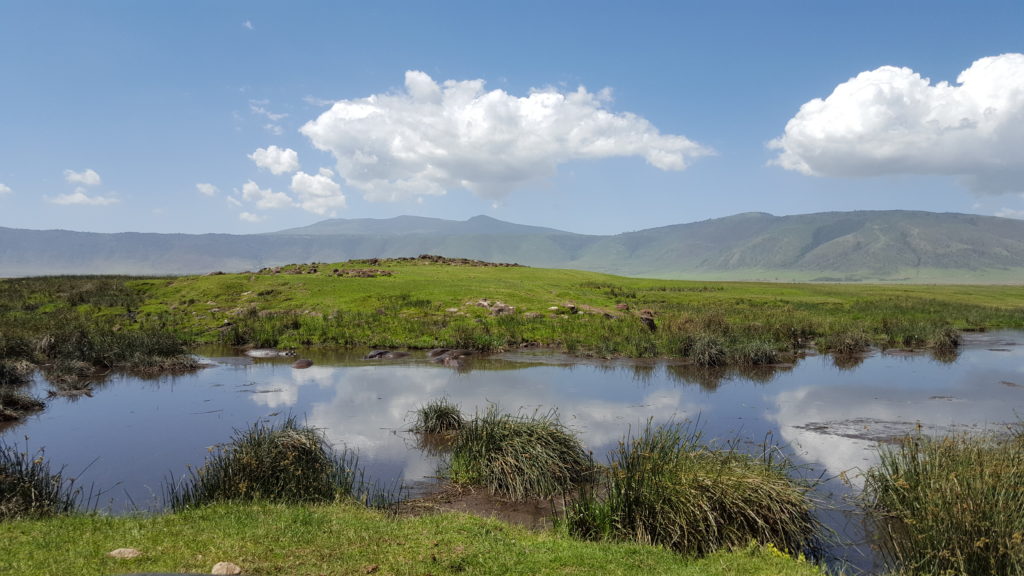 For the amount of packs there are, it's amazing how many animals we saw that were flying solo or with one or two mates. The photos make it seem like animals were scarce, given the vast empty fields behind them. But I guarantee you that they were just everywhere! 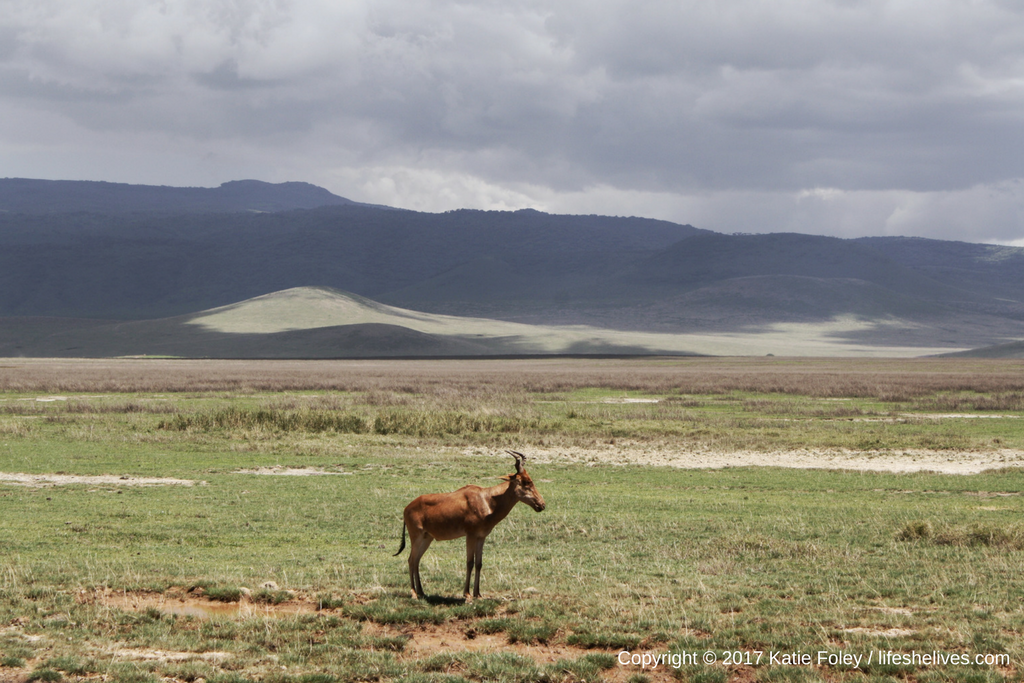 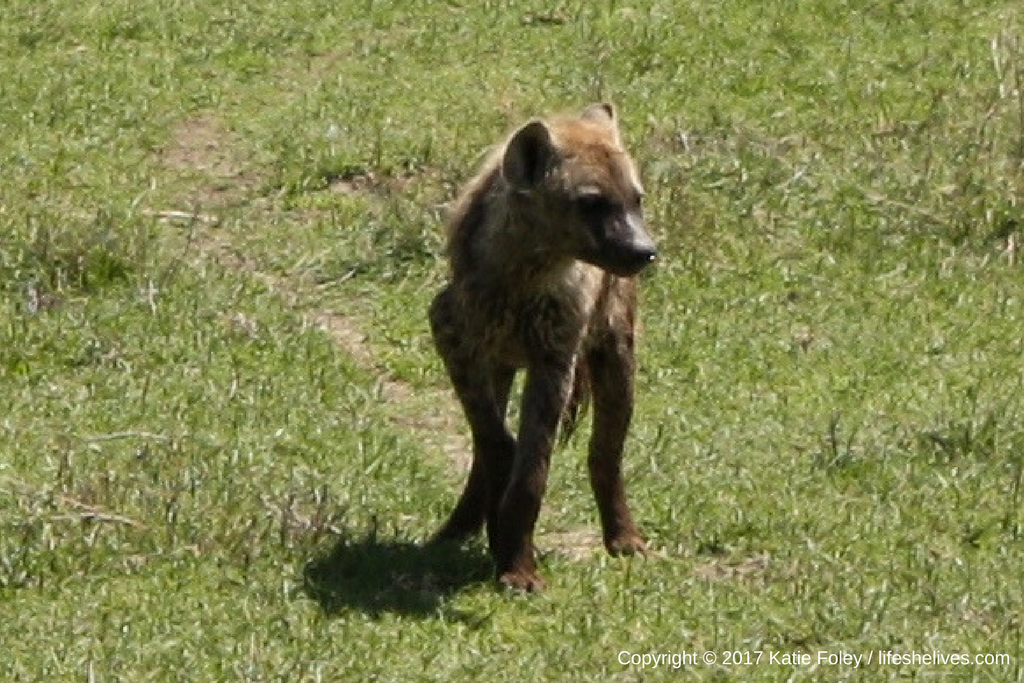 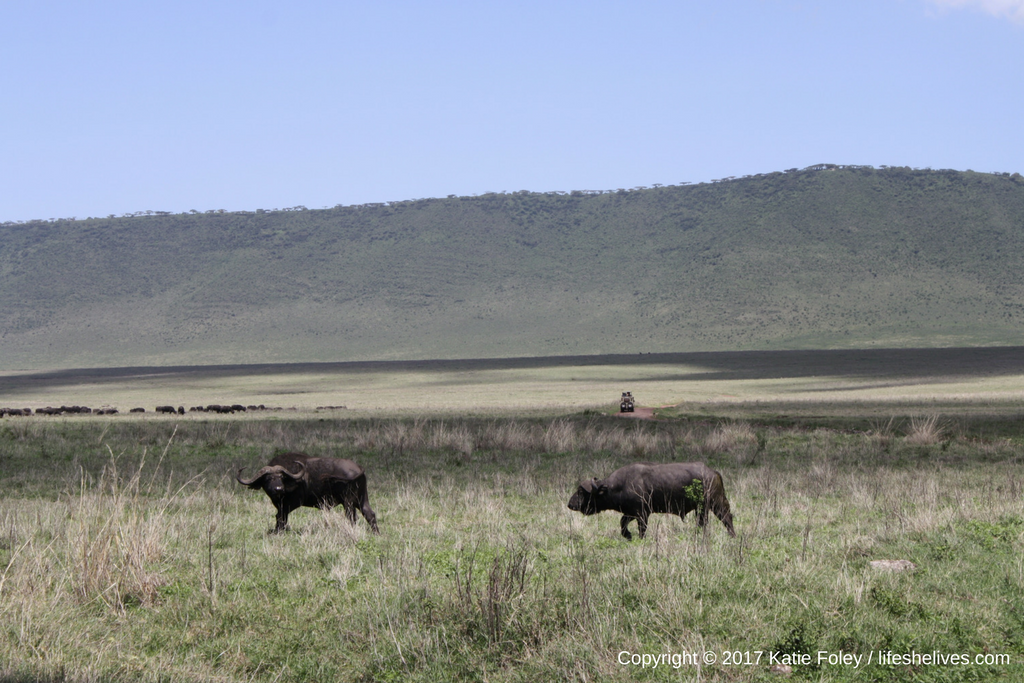 Toward the end of the tour, we ended up at a little rest stop on a lake where guests were allowed to get out of their trucks, stretch their legs and use the restroom. Here, we were surprised to see even more animals – and pretty close up. 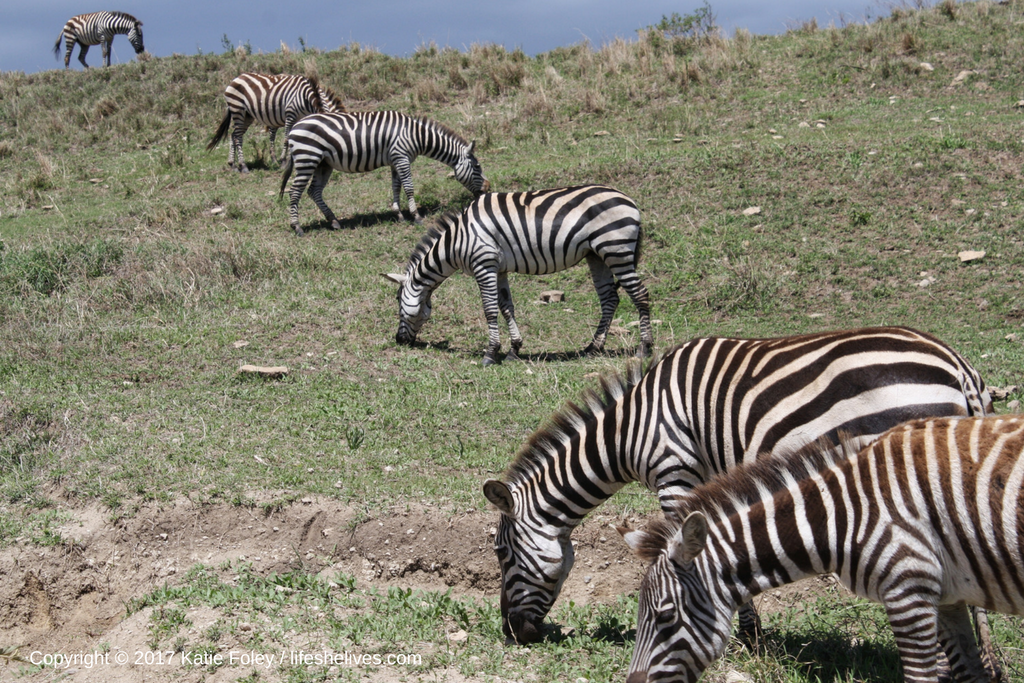 On this stop we spotted an elephant making its way up a hill on the other side of a rocky creek. Now, you're technically not supposed to wander around the area on foot for obvious reasons, but about 100 people started making their way toward that little creek to get a closer look at this majestic elephant. As my mother, sister and I got a little closer, our tour guide shouted to stay back a little bit, because unbeknownst to us there was a family of lions lingering outside of their den, right by the elephant.

After making our way back to the truck, we started our cruise toward the exit. We thought for certain that we had seen all that we were going to see for the day (and believe me, we were NOT disappointed), so we were settling into our seats and packing up our cameras for the ride back to the lodge. Suddenly, our driver pulled over and announced that there was a lion resting in the grass ahead. This was one of the only spottings we had when we weren't surrounded by a few other trucks trying to get a peak. 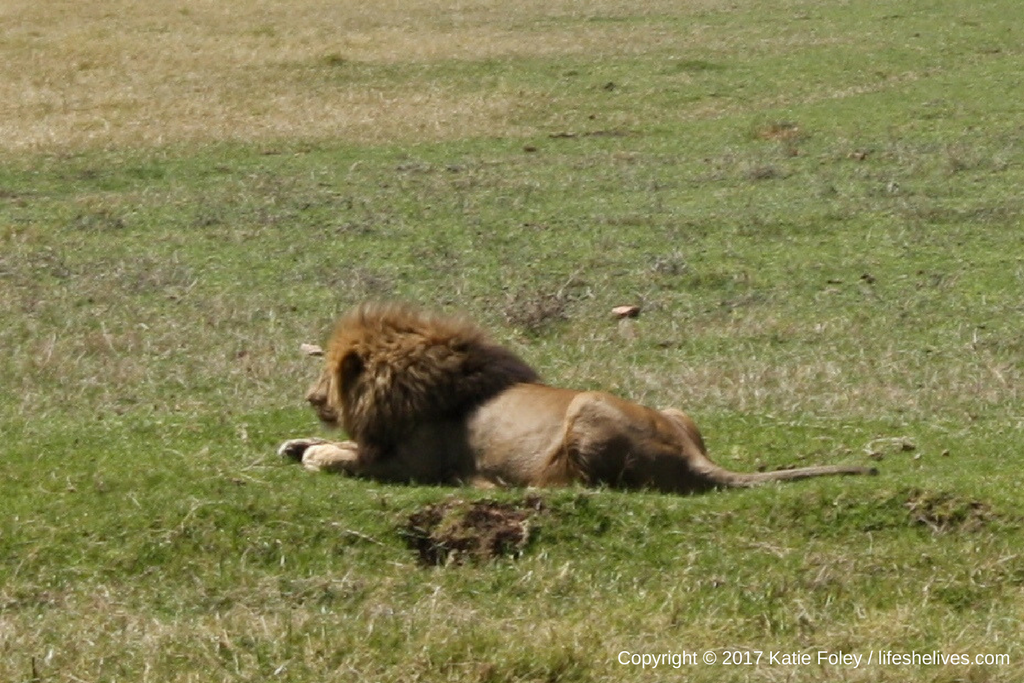 This was also the first lion that we saw with a big, Lion King-esque mane. He was laying down with his back toward us, so we didn't get the face shot that we were all hoping for, but it was still something else. Our driver explained that he was the only animal in that little area because male lions tend to mark their territory and others know not to enter it. If they do, it's a given that it's on.

The Ngorongoro Crater is one of those places that has so much to see that as you make your way up the side to exit, you're already thinking about your next trip. I would easily go back to this location for another safari in the future, no questions asked.

If you haven't already, read about our first safari at Lake Manyara National Park!